Those who tuned in for the the Powerball plus draw 1151 for close to R120 Million on 1 December witnessed something spectacular. The winning Powerball numbers were an incredible 5, 6, 7, 8, 9 and 10. It’s extremely rare to see consecutive numbers in a Powerball or Lotto draw, although the order they were drawn in was 8, 5, 9, 7, 6 and the Powerball was 10. Netting 20 winners a cool R5.6 Million each! Check the video below from the official draw.

Betting on consecutive numbers seems to be popular as it’s also very rare to see so many winners of the Powerball, all with the correct numbers. The 20 winners walked away with a cool R5,688,468 each, while Div 2, which is 5 correct numbers, paid out R6,282.

Which is disappointing as usually Powerball Division 2 wins you a good amount, but once again the prize was shared among the 79 winners. If the Div 2 players had placed the same bet on Lucky Numbers they would have got a cool 60000/1, a much better return than the R6,282!

The full results for the Powerball 1151 draw as well as the payouts can be found below or on the National Lottery website. 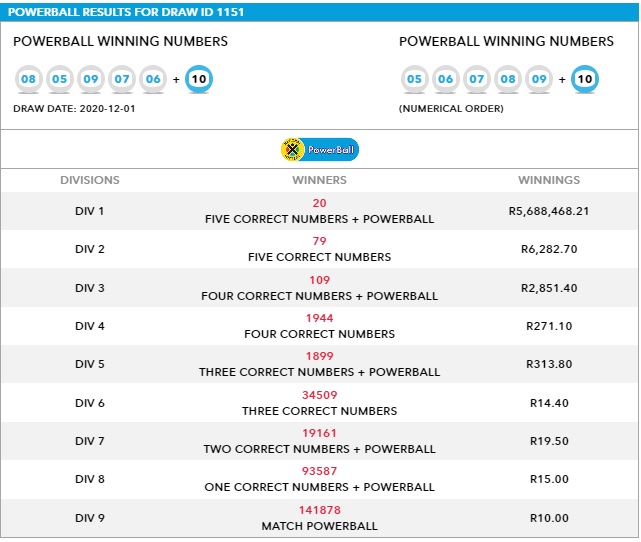 There have been some cries from punters that the lotto is a scam, but consecutive numbers have happened in other lotteries in the past, and seems to be a common lotto strategy. We’re also sure that there will be many more Powerball consecutive numbers players in the future! We’d like to wish the 20 winners our congratulations and we hope they use the money to make some dreams come true!