Hollywoodbets are one of the biggest bookies in South Africa, and their position on the market does the talking. They have provided South Africa with a solid betting experience both from an online and from a physical betting shop perspective. It was however evident their old website had a lot of room for improvement, and perhaps it was high time a new revamped Hollywoodbets site was provided for punters.

Hollywoodbets seem to have heeded the pleas from many punters out there and have therefore come up with a new website that we will review in this article. Perhaps they were also driven by a decline in website traffic by 3 million visits between August and November 2019. Could this be a way of retaining and attracting new customers alike? We have a closer look at the upcoming new Hollywoodbets site.

The first change to notice on the revamped Hollywoodbets website is how the pages have been designed to fill up the whole screen. This makes the icons and buttons very large when compared to the old site which somewhat appeared cramped. The new site has a modern appearance and feel and maintains the purple colour with a combination of black as compared to the old site that had a combination of white and purple. The new colours are much more pleasant on the eyes and the dark style mode is a welcome addition too.

The increased space usage has also allowed for the centre pane of the web page to be occupied by a number of the day’s match highlights and a upcoming fixtures in the English Premier League. This is much better info as compared to the old site that only gave a few highlights, one at a time. The sports menu options remain the same, and these can be accessed by scrolling through the left pane of the page. However, on clicking the sports options from this menu, the submenus now appear on the centre part of the screen instead of the below the sports menu option.

The market options are also arranged according to a type, which allows for quicker selection of the desired markets and bets. They have also reduced the clutter on the midsection of the page by placing links to social media at the bottom of the right page. The net result of all these changes is enhanced usability that equally competes with other excellent interfaces on the market.

Whilst the new web page can be accessed via mobile devices, it is not yet fully optimized for such, and our attempt to use it revealed a few non responsive functions. However the new mobile site does stay in line with the changes that have been made to desktop. 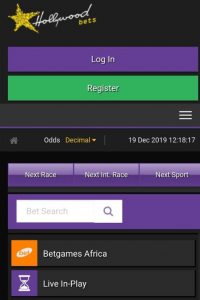 Placing bets on the new website is very easy and much faster compared to the old site. The sports option is selected from the left pane, and further country/league choices on the particular sport can be selected from the centre pane. The punter may then choose a market of their choice, and this selection is added to the bet slip that appears on the right pane. From there, the desired stake can be selected, and the bet confirmed. Very easy and punters should have no trouble finding and placing bets.

There is no change in the welcome bonus offering by this bookie though – Hollywoodbets continue to offer a R25 no deposit bonus for new customers. This bonus may be claimed by those who have not yet uploaded their FICA documents, although withdrawals of any winnings would be impossible lest they verify their account.

Other than the welcome bonus offer, Hollywoodbets also have several other promotions that run from time to time, giving existing and new account holders a reasonable chance to make some profit.

The sports and market options provided by Hollywoodbets are still comprehensive, giving punters a fantastic choice to select from. We find the market options for major soccer leagues to be wide and competitive with most South Africa bookies. Hollywoodbets also offer betting services for live matches, and these are accessible through a tab allowing for quicker access to the games. 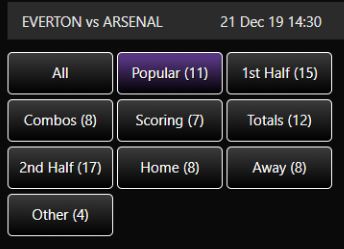 Still no sign of an Hollywoodbets App, but the new site does give us more confidence that one is ready to launch soon, we’re hoping that it includes several features like cash out and edit my bet, but let’s wait for the app to launch first!

Depositing and Withdrawing at Hollywoodbets

Final Thoughts on the Hollywoodbets Site

The new Hollywoodbets site shows evidence that more thought has been placed in providing an enhanced betting platform for punters. The new layout allows for the full-scale occupation of the screen resulting in bigger and easier to use icons and buttons. There is a lot of functionality that has been added, and this gives enhanced usability and speediness when placing bets. It is a marvel to use this site on a PC. Sadly, the same cannot be said about the new site on a mobile device as it is evident that they are still working on it but it’s looking like it’ll be a winner.

Other than the revamped layout and functionality, the rest of the services remain as they were. These include bonuses, payment gateways, sports and market options that have historically driven the popularity of the bookie. We do hope they also improve on their bonus offerings for new customers, and also hope to see a live customer chat function on the website. Other than that, well done to Hollywoodbets for this improvement, and we anxiously look forward to the full optimization of the new site on mobile devices.

What are your thoughts on the new Hollywoodbets site? Do you love it or hate it? Let us know in the comments below.