The shocking news that Zidane has resigned as head coach from Real Madrid less than 5 days after winning the Champions League came as a shock to many. However bookmakers are on the ball and have priced up a Next Real Madrid Manager market. We’re going to have a brief run down of the favourites : 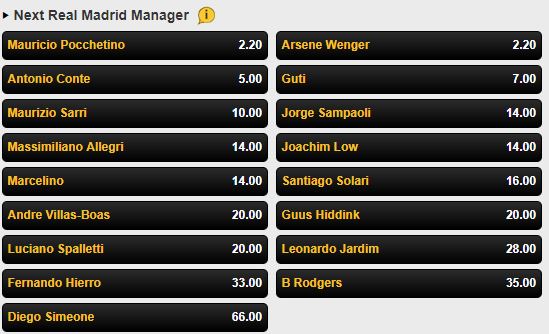 The current Spurs manager looks a good replacement for Zidane and we would not be surprised to see Zidane take over the reigns at Tottenham. Poccchentino would be a fantastic fit at Real Madrid as he favours a open attack approach, something which Real Madrid will be looking for. Will Spurs let him go though, well he could force it through for a big club like Madrid. He’s certainly our favourite and we’ll be having a nibble on the 12/10 on offer at Gbets.

Wenger has had a troubled few years, culminating in his resignation from Arsenal. Let’s face it, this should have happened years ago. We don’t see Wenger as a viable option here, perhaps a stop gap measure until they find a long term solution. Your money is better spent on Pocchentino as Wenger won’t bring anything new or long term to Madrid. You can back Wenger at 12/10 at Gbets.

It’s been a tough season for Conte and Chelsea as they missed out on Champions League after a poor 2017/2018 season. Conte would be a decent choice for Madrid and there is some value on the 4/1 on offer. The big question is if Chelsea are looking to offload him which would then leave them looking for a World Class manager. We’re tempted at 4/1 but as we said Chelsea might not want to let him go. You can back Conte to be the next Madrid manager at 4/1 at Gbets.

With no real managerial experience but loads of football and Madrid experience Guti comes in at 6/1 to replace Zidane. We think there’s no value here unless Madrid are looking to take a huge risk with a somewhat unknown quantity. Our advice is to save your powder for an outsider. You can back Guti to be the next Real Madrid manager at 6/1

The German national team manager is a perfect fit for Real Madrid and we really fancy him as an outsider. Realistically we don’t see him being the national coach after the World Cup which means he could well be the next Real Madrid manager. You can get a decent 13/1 on him and we’ll be having a small nibble at that price.

Who are you backing to be the Next Real Madrid Manager? Let us know in the comments below!